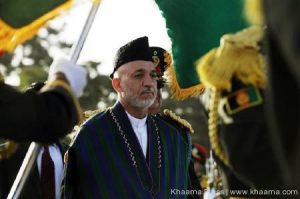 President Hamid Karzai was praised by Afghans for rejecting the invitation by President Barack Obama to meet him in Bagram air base.

A last-minute invitation was sent to President Karzai to come to Bagram air base as Obama arrived to Afghanistan on Sunday following an unannounced visit to meet with the US troops.

White House officials said, “We did offer him the opportunity to come to Bagram, but we’re not surprised that it didn’t work on short notice.”

ARG Presidential Palace following a statement said an invitation was sent from the US embassy in Kabul for President Hamid Karzai to visit Bagram airfield and meet with President Obama.

Karzai quoted in the statement said he would be pleased to welcome President Barack Obama in Presidential Palace in Kabul. However, he said he has no intention to visit Bagram airfield to meet President Obama.

In the meantime, Abdullah Abdullah, one of the leading candidates in Afghanistan’s presidential race, said the decision by President Karzai not to go to Bagram was “respectful to the people of Afghanistan.”

Ashraf Ghani Ahmadzai, one of the other leading candidates, told Wall Street Journal in an interview that he wasn’t privy to the security discussions surrounding Mr. Obama’s visit.

Some Afghans saw the episode as a deliberate snub and said the U.S. leader didn’t respect diplomatic protocol.