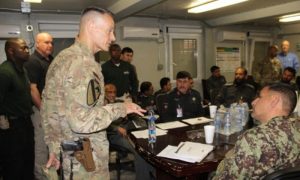 Personnel from the Ministries of Defense and the Interior assembled for the second training in a series on force management within the Afghan National Defense and Security Forces.

The eight-week training hosted by Combined Security Transition Command-Afghanistan’s Capabilities Development Directorate was designed to expose the Afghan National Defense and Security Forces to the force management concepts and processes required to lead a growing organization.

“The train-the-trainer course was created in order to improve force management systems and practices while empowering Afghan Security Institution personnel to take the lead in charting their organization’s future,” said Don Vandergriff, the lead instructor for the course.

“There are no wrong answers here,” said Vandergriff, who hails from Woodbridge, Virginia. “It’s best when the students learn from each other.”

U.S. Army Col. Garrett D. Heath, director of capabilities development, said the second course was a success, and his team looked forward to continuing the series.

“These force management classes are timely and essential for our Afghan partners as we work together to enhance their capabilities,” said Heath. “This summer, both the Ministries of Defense and the Interior force managers will apply what they learned as they conduct their 1397 command plan review and prepare the 1397 Tashkils [Afghan organization, manning and equipment requirements]. The Afghan National Defense and Security Forces will reap the benefits of this training in the coming years as these leaders take ownership of these important processes.”

“By the end of the course, the Ministries of Defense and the Interior will have a cadre of experienced officers that has thought critically about how to propose, implement, manage and lead change in Afghan institutions,” added Heath, of Washington, Georgia.

Afghan National Army Brig. Gen. Akbar, the newly appointed head of the Ministry of Interior Force Management Directorate, expressed his enthusiasm for the course series, thanking his subordinates for their efforts in learning. He also thanked his partners in CSTC-A for their support of the event.

“The hard work of our Afghan Security Personnel and the support of CSTC-A will help improve our organizations as we grow as leaders and managers,” said Akbar.