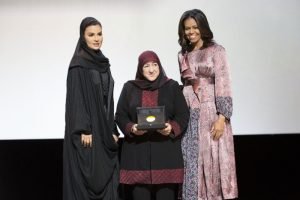 An Afghan woman was awarded the 7th World Innovation Summit for Education (WISE) prize at a ceremony in at the Qatar National Convention Centre (QNCC) on Wednesday.

The 65-year-old Dr. Sakina Yaqoobi, popularly known as Afghanistan’s mother of education, received the prize for dedicating her time and persistently working in the past two decades to rebuild Afghanistan’s education landscape, devastated by war.

The prize was presented to her by Qatar Foundation for Education, Science and Community Development (QF) Chairperson HH Sheikha Moza bint Nasser.

“From refugee camps to secret night schools, and often at great personal risk, she established a network of organizations that provide general education as well as public health education. While her work focuses on girls and women, it also benefits boys and men. Millions have benefited from her optimism,” HH Sheikha Moza bint Nasser said.

In the meantime, Dr. Yaqoobi said “I feel honoured and blessed to be chosen as this year’s WISE Prize for Education Laureate. This is a great moment for Afghanistan because right now at its tipping point. Our people are suffering, they are oppressed, and poor and really hopeless.

She added “With this Prize, we know that we can continue to educate more and more Afghans, giving them hope and encourage them to go forward no matter what they are facing.

“It is such a great gift to me, and I dedicate the Prize to the Afghan Institute of Learning and all of the women, men and children we are educating,” said Dr Yaqoobi.

Being the Founder and Executive Director of Afghan Institute of Learning (AIL), Dr. Yaqoobi began her work in the early nineties, when she started working in Afghan refugee camps in Pakistan.

A passionate educator herself, she trained teachers, opened schools for children, and learning centers for women.

She was also awarded the 2013 Opus Prize at a ceremony at Georgetown University for her work and efforts in the humanitarian fields and in education sector.