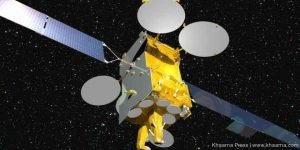 Afghanistan’s first satellite which was deployed into the orbit earlier this year has formally started its operations.

The announcement of the formal operation of Afghansat 1 was made during a conference attended by high level government officials including first vice president Mohammad Younus Qanooni.

Qanooni said the launch of Afghanistan’s first satellite was vital for the future of Afghanistan as Afghansat 1 will further pave the way to connect the Afghan people with the world.

According to the Ministry of Telecommunication and Information Technology of Afghanistan, the Afghansat-1 will provide digital broadcast services after it’s formal launch.

The satellite was deployed into the orbit by Eutelsat Communication under a multi-year agreement signed by Afghan Telecommunication and Information Technology Minister Amirzai Sangin.

Eutelsat 1 will deliver full national coverage and extensive reach of Central Asia and the Middle East, under the multi-year agreement.

The satellite will also support a wide range of services including broadcasting, mobile telephony back-haul and IP connectivity.