Afghanistan to review cases of 400 convicts sentenced to death 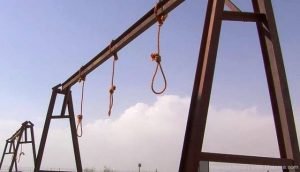 The Presidential Palace officials have said the government will review the cases of 400 convicts sentenced to death by the courts of the country.

The officials have further added that majority of the cases are pending signature of President Ashraf Ghani Ahmadzai, however, they insisted that the government will seek alternatives for the convicts who are waiting for death penalty.

President Ghani’s legal advisor, Abdul Ali Mohammadi has told The Radio Free Europe (RFE) that the execution of over 400 convicts is a major issue for the government of Afghanistan.

Mohammadi further added that President Ghani is committed to ensure justice and his recent visit to Pul-e-Charkhi prison is an example of his commitment to maintain justice in the country.

This comes as at least six people, including a notorious Mafia leader were recently executed in Kabul after their execution was approved by former President Hamid Karzai and Kabul courts.

The review of prisoners cases was recently instructed by President Ghani and around 7,300 cases have been forwarded to the presidential palace by the Attorney General Office of Afghanistan.