Afghanistan strongly condemn use of civilians as human shield 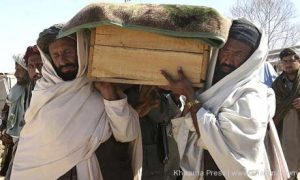 Afghan president deputy spokesperson Adila Raz on Monday said, “The government of Afghanistan strongly condemn the use of civilians as human shields and reiterates that such actions will harm stability and Afghan peace process.”

This comes as at least 26 people including 11 Afghan kids were killed during a joint military operation by Afghan and coalition security forces in Shegal district of eastern Kunar province on Saturday.

According to reports president Hamid Karzai has appointed a delegation to visit the area and inspect the incident.

The Nato-led coalition confirmed it was investigating the allegation and that it had used aircraft in the area to support a force of Afghan and foreign troops.

The fighting in Kunar on Saturday also led to the death of a US civilian adviser. An Afghan security official in the area said the joint operation had been launched after intelligence reports showed that hundreds of Taliban militants were massing in the area.