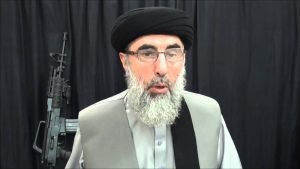 He told reporters that the draft agreement has been signed and will become enforceable once the Hezb-e-Islami party signs it.

Khan further added that the group has agreed to have no links with the anti-government armed militant groups, insisting that Hekmatyar’s only demand is to remove his name from the international blacklist.

Welcoming Hezb-e-Islami’s decision to join peace process, Khan said the agreement will have a positive impact on security situation of the country.

According to Khan, the exact location where Hekmatyar is based is not clear so far but insisted that the government welcomes his return to the country.

He also added that Hekmatyar has neither demanded any privileges for joining peace process nor any post in the government.

Khan said the draft agreement was signed by Hezb-e-Islami representatives and Afghan peace council officials in the residence of Pir Syed Ahmad Gilani.

Khan hoped that the international community will help in removing restrictions on Hezb-e-Islami party.

This comes as the United States earlier welcomed political negotiations between the Afghan government and Hezb-e-Islami party led by Gulbuddin Hekmatyar.

“We support an Afghan-led, Afghan-owned process for a negotiated resolution of the conflict in Afghanistan,” said John Kirby, spokesman of the US Department of State.

However, Kirby said the United States will continue to seek reconciliation conditions, including that any reconciled group must end the violence.