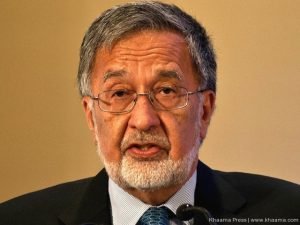 Afghan foreign minister Dr. Zalmai Rassoul insisted that the Afghan government will not allow to open a liaison office for the Taliban group in Qatar unless the group is not prepared to sit-in for peace talks.

While speaking among the Afghan lawmakers foreign minister Zalmai Rassoul said negotiations between Afghan and Qatar officials are in progress to sign an agreement in this regard.

He said, “The office for the Taliban group will not be opened unless the Taliban group or its representatives do not announce to start talks with the Afghan government. It will be highly risky if the office is opened and secret talks are hold.”

Mr. Rassoul further added, “The Taliban group is saying that they are not ready to hold talks with the Afghan government. Who are they going to negotiate with? We will face a big issue if they hold talks with the others and we have witnessed it in the past.”

He insisted that the Taliban office in Qatar will be opened for peace talks only and in no case will help the Taliban group to be formally recognized.

He also said that the legal conditions and authorities of the Taliban office members will be specified in the framework of the agreement between Afghanistan and Qatar.

Negotiations over the agreement is in progress between Kabul and Doha, he said adding that, “We should know with whom we are holding talks and it should be clear that the Taliban representatives who are going to visit the Qatar office to which group they belong to.”

He said the Afghan high peace council will have the authority to confirm if the representatives are representing the overall Taliban group or not.

This comes as the Afghan government earlier insisted to open Taliban office in Saudi Arabia or Turkey however talks on Taliban liaison office in Qatar started following direct talks between Washington and Taliban group.