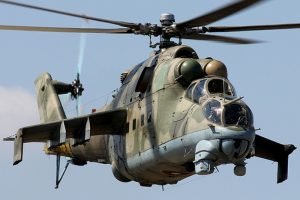 Afghanistan has reportedly requested delivery of military equipment from Russia including helicopters in a bid to boost the capabilities of the Afghan National Defense and Security Forces.

The request by Afghanistan was reportedly made during deputy foreign minister Hekmat Khalil Karzai’s visit to Russia this week.

“We sent a request to the Russian Security Council for expanding cooperation [in the military field], including for the deliveries of helicopters to Kabul,” Karzai was quoted as saying in a report by State-run Sputnik News.

Earlier, the Afghan and Russian defense officials have agreed to establish a military-technical cooperation committee in a bid to jointly combat international terrorism.

The Ministry of Defense officials in Kabul confirmed that a meeting was organized between the Afghan and Russian officials to discuss military cooperation between Kabul and Moscow.

The meeting was organized on the sideline of the 5th International Security Conference in Moscow late in April which was attended by over 500 politicians and military leaders of the world.

In the meantime, the Russian helicopters company officials have said they are prepared to establish a service center in Afghanistan to provide repair and other technical services to the Afghan Air Force.

The Chief Executive Officer of the Russian Helicopters Alexander Mikheev said last month that the company is also prepared to assist the Afghan Air Force in training the Afghan technical staff and engineers.

According to the State-run Sputnik News Agency, Mikheev made the commitment during a meeting with Shakir Kargar, the special presidential envoy to Commonwealth of Independent States.

Top Taliban officials and about 3,000 members of “religious scholars, politicians, and different...

One thought on “Afghanistan requests delivery of helicopters from Russia”