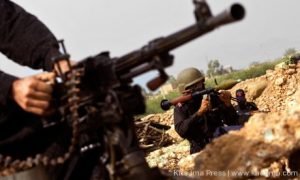 The Interior Ministry of Afghanistan strongly rejected the Pakistani claims regarding the execution of 23 Pakistani Frontier Corps (FC) personnel inside the Afghan territory.

Interior Ministry following a statement, said Saturday, “The Afghan Ministry of Interior Affairs rejects a claim made by Pakistan authority in regards to the killings of 23 FC personnel inside the Afghan territory.”

The statement further added, “The Afghan Ministry of Interior Affairs rejected the claim after it launched an investigation into the matter, no evidence was found to substantiate the claim.”

“The Afghan Border Police is fully committed to fight against international terrorism and they have proven in the past that their sacrifices are not only for the security of Afghanistan but also for the security of the region and the world,” the statement added.

“The Afghan National Police Force will not allow any terrorist group to operate inside Afghanistan,” Interior Ministry said in its statement, adding that, “While stating our resolve commitment to curb terrorism, The Afghan security forces is ready to further investigation if Pakistan government provides any evidence in regards to this incident.”

This comes as the Foreign Affairs Ministry of Afghanistan said Thursday that the Pakistani claims regarding the death of 23 Pakistan Frontier Corps (FC) personnel inside the Afghan territory cannot be confirmed.

Foreign Affairs Ministry in its statement, said, “While we will investigate the matter thoroughly, it is our belief that any terrorist act in our region is the outcome of the short-sighted policy of using extremism and terrorism as a means of strategic influence and pursuing misperceived national interest. It is impossible to nurture venomous snakes on one’s soil and wishfully think that they will only bite others.”

Tasneem Aslam, a spokesperson for the Foreign Office of Pakistan, following a statement said Thursday that the government of Pakistan conveyed its strong protest and serious concern in this regard to the Afghan government.

Aslam further added that the protest was recorded by advisor to the Prime Minister of Pakistan on National Security and Foreign Affairs Sartaj to Foreign Minister of Afghanistan Zarar Muqbil Osmani in SAARC Ministerial Meeting.