Afghanistan receives another C-130 aircraft from US 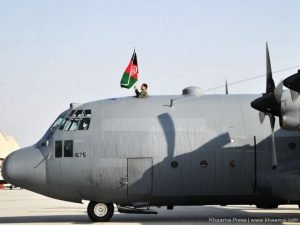 The United States has delivered another C-130 aircraft to the Air Force of Afghanistan as part of the rehabilitation effort of the Afghan Air Force.

A statement released by the Air Force of Afghanistan said Afghanistan has so far received three C-130 cargo aircraft from United States.

The last delivery of the C-130 aircraft to Afghan Air Force is expected by the end of this year, the statement said.

According to the Afghan Air Force, the delivery of C-130 aircraft has helped to resolve the transportation issues and has further increased the combat capabilities of the Afghan armed forces.

The United States of America handed over two C-130 aircraft to the ministry of defense of Afghanistan late in last year.