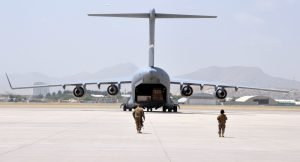 The Afghan Air Force (AAF) received five new combat helicopters from the United States on Friday amid ongoing efforts to boost the air power of the Afghan National Defense and Security Forces (ANDSF).

The new helicopters are MD-530 CAyuse Warrior helicopters and were transported to Hamid Karzai International Airport on Friday.

Lt. Ashford further added “We are also getting kits to modify the existing 13 to be able to support guns and rockets, but these five will be the first with both capabilities in service here.”

“Some Afghans were skeptical of the MD-530 when it first started operating, however, it has proven itself in combat,” said Ashford. “Now everyone wants MD-530 support. The pilots are doing great work flying daily combat missions supporting (ANA) troops on the ground and escorting AAF Mi-17s in the air.”

Ashford said all of the helicopters were shipped from MD Helicopters Inc., in Mesa, Ariz., and all 18 are armed with two .50-caliber machine gun pods. The first six were delivered in March 2015 to help fulfill aerial fires gap for the 2015 Fighting Season.

Noel Shorts, a senior test pilot and one of five test pilots working with the MD-530s here, said the Rolls Royce motor has proven its reliability, and the extended tail helps considerably in these high altitudes.

According to the MD Helicopters website, “The MD-530F’s high altitude lift capability is achieved by main-rotor blades six inches longer than the MD 500E. The tailboom is extended eight inches and the tail rotor blades have been lengthened to provide increased thrust and directional control at high altitudes.”

Maj. Mitchell Ryan, 438th AEW operations staff officer, said the AAF has flown more than 150 operational missions with the MD-530 just since May 1, 2016.

“We’ve seen a steady increase in the employment of the (MD-530),” said Ryan. “Adding these five new helicopters will give the AAF the ability to fly even more critical missions.”

At a price of about $5 million each, the MD-530 provides both an economical and critical air-to-ground capability, enabling Afghan pilots to engage the enemy. As with all major systems procured for the AAF, the MD-530s were purchased using the Afghan Security Forces Fund.