sea sponge populations ‘dying by the millions’ due to climate change 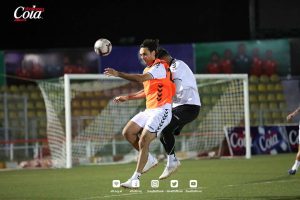 A football friendly match between Afghanistan and Palestine ended in draw tonight after the two sides failed to hit a goal during the first and second halves of the match.

The friendly match was hosted by Afghanistan Football Federation in capital Kabul.

Both the Afghan and Palestinian footballers played aggressively during the first and second halves of the game but neither of them managed to hit a goal.

It was mainly due to the hard works of the goal keepers and defense lines of the two teams that prevented the two sides from scoring a goal and subsequently the match ended in draw.

The Afghanistan Football Federation hosted the match on the occasion of the 99th Independence Day of Afghanistan.

This is the first time Afghanistan is hosting an international team for a football match after almost five years.

It is worth mentioning that the Palestinian national football team has earlier defeated Afghanistan in two matches while one of the matches between the two sides ended in draw.

The Islamic Emirate of Afghanistan’s spokesperson, Zabihullah Mujahid, announced that a gathering...

In a recent statement, the Taliban-led Da Afghanistan Bank stated that money trading and financial...

According to the local sources in the northern province of the country, Samangan, a traffic accident...

In reaction to the Jirga of the Taliban that will take place in the Loya Jirga tent, Human Rights...