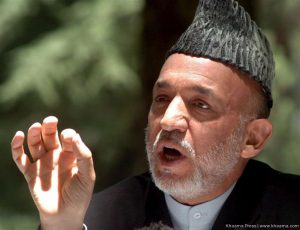 Afghan president Hamid Karzai on Saturday said that the government of Pakistan is looking to force Afghanistan for the recognition of controversial Durand line as the formal border between the two nations by creating issues including construction of border gates and other military installations.

While speaking during the a press conference, president Karzai said Pakistani officials have repeated shared the issue formally and informally with the government in the past.

Karzai insisted that the Afghan government will never recognized Durland as the formal border line between the two nations.

President Hamid Karzai praising the Afghan border guard who was killed during clashes with the Pakistani soldiers called on the Taliban group fight Afghanistan’s enemies.

His remarks are seen as a swipe against Pakistan and will likely unsettle already shaky ties with Pakistan amid United States efforts to persuade Pakistan to help Afghan peace process.

In his speech to the Taliban group, Karzai said that Taliban militants should turn their weapons against those polices where plots are made against the Afghan prosperity instead of destroying their own country.

He said the Taliban militants should stand with this young man who was martyred and defended their soil.