Afghanistan likely to receive Russia’s support in fight against terrorism 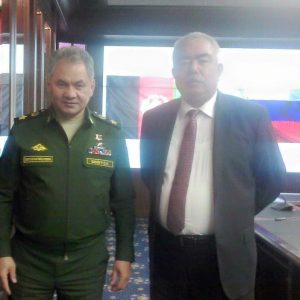 Afghanistan’s First Vice President Abdul Rashid Dostum in his visit to Russia called on the country’s officials for support in fight against terrorism which was welcomed by a number of Russian officials including the country’s defense minister Sergey Kuzhugetovich Shoygu.

While talking to Radio Azadi by telephone, Dostum’s spokesman Sultan Faizy said that Russia is evaluating the situation in Afghanistan to “see what they can help with.”

“The Russian side is committed to support and help Afghanistan in terms of helping its air and military forces.”

“We’re lacking air support, weapons, ammunition. We need a lot of backing and support to fight against terrorism.” He added.

Faizy emphasized that it does not mean direct military intervention by Russia.

Russian officials were concerned about Islamic State (IS) militants gaining ground in Afghanistan and the Taliban’s brief capture of the northern city of Kunduz last week, Faizy said Dostum was told in Russia.

“Our Afghan counterparts asked Russia to provide military and technical assistance,” Igor Morozov said. “Today they ask for help and support from Russia in military equipment, ammunition, helicopters stressing that terrorists would not have succeeded in Kunduz, if the Afghan military had helicopters,” he added.

“Since Islamic State, a terrorist group banned in Russia, openly declared the transfer of its terrorist activities to other countries, for us a danger emerges of militants’ transition to the territories of Uzbekistan and Tajikistan,” the senator said, adding that “We need to suppress terrorism far away from Russia’s borders, so cooperation with Afghanistan should be organized by all means.”