U.S citizen missing in Afghanistan, family claims he is in Taliban custody 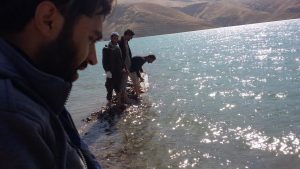 Afghanistan has launched the fish farming (pisciculture) in the mega Salam Dam built with the financial support of India in western Herat province of Afghanistan.

The Ministry of Agriculture, Irrigation and Livestock of Afghanistan (MAIL) said at least 50,000 fingerlings were released in the dam to start the fish farming.

MAIL further added that the step has been taken to start fish farming besides the dam produce electricity and irrigates hundreds of acres of land in Herat.

According to the officials, the fish chicks will start producing more fishes after two years and will produce thousands of tons of fish.

The officials also added that 1.5 million Afghanis have been invested for the establishment of the fish farm in Salam Dam.

The landmark Salma Dam project was inaugurated by the Indian Prime Minister Narendra Modi and Afghan President Mohammad Ashraf Ghani in western Herat province of Afghanistan earlier in the month of June this year.

The reservoir of the dam is 20 kilometer long and 3 kilometer wide and has a storage capacity of 640 million cubic meters of water.

The officials earlier said the dam is expected to produce 42 megawatt of electricity and will irrigate around 80 hectares of agricultural land.

U.S citizen missing in Afghanistan, family claims he is in Taliban custody

An Afghan-American national who had travelled to Afghanistan for working purpose has gone missing...

The Chief of Staff to the Taliban Ministry of Interior Affairs met with the families of the victims...

A man in Kandahar province of southern Afghanistan killed his three sons, 13, 9, and 6 due to financial...