Afghanistan has never accepted Durand Line as border since 1893: Karzai 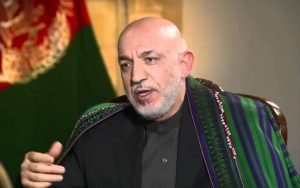 In an interview with BBC Urdu, Karzai termed the formation of Durand Line a ‘result of British imperialism’ in the region.

He said Afghanistan has never accepted this border since 1893, nor will they ever accept it in future.

“When Pakistan came into being in 1947, they received it this way, so we are not blaming them but Durand Line is a blow which no Afghan can ever forget. We do not accept this border but will not fight over this issue,” Karzai added.

In other parts of the interview, Karzai said Pakistan does not want good relations between India and Afghanistan and wants “no bilateral trade and no access to Central Asia for India” which is unacceptable for Afghanistan.

Karzai further added that India is helping Afghanistan build its infrastructure and health facilities and has “filled Afghanistan with money despite being a poor country”.

“India wants to truly befriend Afghanistan and we want Pakistan to do the same,” he said, adding that Pakistan should also become a part of the regional coalition between Afghanistan, India and Iran, but “Pakistan’s condition is that Afghanistan should not have contacts with India.”

According to Karzai, the relations between Afghanistan and Pakistan will improve rapidly if the issue is resolved.

6 thoughts on “Afghanistan has never accepted Durand Line as border since 1893: Karzai”