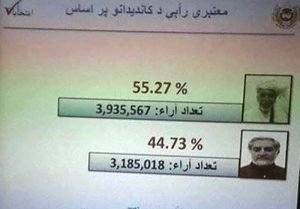 In an unexpected move, the Independent Election Commission of Afghanistan announced the final vote results of the 2014 presidential elections.

The controversial presidential election in 2014, organized in two rounds, led to the formation of the government of national unity.

The final vote results of the second round of the presidential election remained unascertained; however the IEC chief Mohammad Yousuf Nuristani announced the final results during a press conference today.

Nuristani further added that President Mohammad Ashraf Ghani had received 3,935,567 votes, forming 55.27 percent of the total votes casted during the second round of the elections.

He said the Chief Executive Officer Abdullah Abdullah had received 3,185,018 votes which comprised of 44.73 percent of the total votes.

The government of national unity was formed with the interference of the US Secretary of State John Kerry as the controversial elections put the country on the brink of a political crisis.

Finally, President Ghani and CEO Abdullah, the then presidential candidates, signed an agreement for the formation of a national unity government on 21st September 2014, following days of negotiation between the two candidates to reach an agreement on share of power, role of the chief executive officer and release of final vote results.