Afghanistan gets a symbolic cabinet as GNU fails to announce nominees 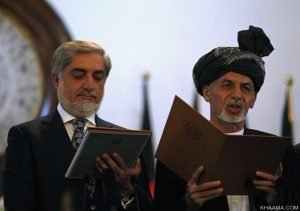 Outraged by continuous delays to announce the new cabinet, a number of the civil society activists on Monday announced a symbolic cabinet in a bid to protest against the Government of National Unity.

The announcement was followed after the deadline set by the civil society activists expired without breakthrough by the Government of National Unity to announce the candidates for the new cabinet.

The activists named candidates for each ministry and sliced cakes as a protest to mock the national unity government leaders.

The cabinet of the Government of National Unity has not been announced despite three months have passed since the formation of the new government.

President Ghani and chief executive officer Dr. Abdullah Abdullah were sworn in on Monday 29th September 2014 after the two leaders agreed to form a Government of National Unity.

President Ghani had promised to announce the cabinet within 45 days after taking the office as the new president of the country. However, there has been no breakthrough amid reports suggesting that the two leaders are at odds on nominees for respective ministries.

Sources privy of the development said the issue was discussed during a meeting in the palace on Sunday and that President Ghani is expected to hold talks with the nominees on coming Monday and Tuesday.