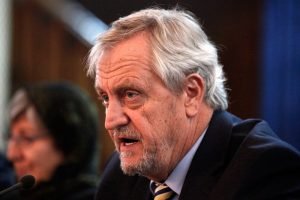 The UN Secretary-General’s Special Representative for Afghanistan Nicholas Haysom has said Afghanistan is facing major economic, security and political challenges in 2016 despite progress made in the fields of forming the civil and electoral sector.

In his speech during a session of the UN Security Council on Afghanistan, Haysom said the security situation has deteriorated with intensified insurgency activities and the economy remains a matter of concern as the Afghan National Unity Government is struggling to project national unity.

He said “In 2016, it is vital that the National Unity Government demonstrates increasingly its effectiveness, not only to the Afghan people but also donors, on whom it is largely dependent for financial, material and technical assistance.”

According to Haysom the financial resources currently available to the country will diminish sooner or later, insisting that “This situation cannot continue indefinitely.”

He also stressed that Afghanistan needs to find a political route to peace as many Afghans are anxious about the future, with some feeling they have no choice other than to leave the country in search of security and economic opportunity elsewhere.

“Civilians, as ever, continue to bear the brunt of the conflict, as casualties rise at an ever increasing pace and more people have been displaced from their homes by the conflict,” he said, stressing that with the fiscal gap between revenue raised and spent, poverty is no less prevalent, economic contraction has led to high unemployment, and corruption has yet to be overcome,” he said.

However, he said there has been progress despite challenges noting the progress on reforming the civil service and electoral sector.

He also added that economic growth though low is projected to increase in the next years, and Afghan security forces (ANSF) have shown resilience in the face of an intensified insurgency, he noted.

“The ANSF may be stretched to capacity but, for the most part, they are holding their ground,” he said, adding that “This does not ignore the need for improvements to ANSF functioning, with a particular focus on logistics and administration, and remedial measures to boost both morale and diminish rates of attrition, as well as continued international support for its attempts to build its own air support capabilities.”

He also commended the Government for continuing to put into place the building blocks for long-term economic improvement, including through regional integration.

Insisting on face-to-face negotiations between the Afghan Government and Taliban leadership, Haysom called on the Taliban, which he said has not yet committed to entering into a peace process, to reciprocate the government’s commitment by stepping forward.

“There is no other way for insurgent groups to demonstrate a commitment to the welfare and prosperity of their fellow citizens than to search for a peaceful resolution to the conflict,” he added.