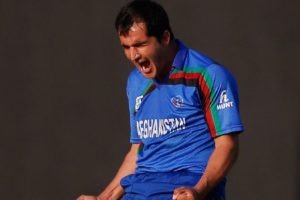 The Afghanistan national cricket team managed to secure place among the top ten teams in the latest ranking for One Day International (ODI) of the International Cricket Council (ICC).

Afghanistan rose two places and jumped to 10 after beating Zimbabwe on Saturday in the first match of One Day International (ODI) series consisting of five matches.

According to reports, the latest ranking by ICC was released following the conclusion of the first ODI between New Zealand and Sri Lanka.

Afghanistan were at 12 in the ODI rankings of the International Cricket Council whereas Zimbabwe were at the 10th spot.

Afghan bowlers Amir Hamza and Mohammad Nabi along with the Afghan batman Noor Ali Zadran were the top performers for Afghanistan in the first match of series.

Noor Ali Zadran’s 63 proved to be gold dust as the opening ODI match was a low scoring game with Afghanistan setting a target of 132 runs by losing all their wickets.

After suffering a series of defeats in the tour of Ireland, Afghanistan is back in the groove. After...