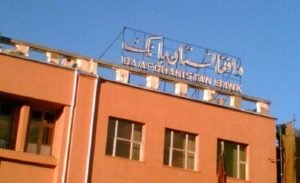 A branch of the Central Bank of Afghanistan also known as “Da Afghanistan Bank” has been robbed by its staff members in southern Kandahar Province.

The staff members of Da Afghanistan Bank branch in Spin Boldak District have escaped to neighboring Pakistan following the robbery.

Police officials in Kandahar say an investigation has been initiated into the incident.

The exact amount taken by the staff members  of Spin Boldak Branch is not identified yet but Fazal Ahmad Azimi, General Manager of Da Afghanistan Bank (DAB) in Kandahar says that there were over 50 millions of Afghanis in the bank by the time the incident took place, adding that the wall locker of the branch was locked following the robbery until further instructions.

He said that the robbery was done by Spin Boldak Branch Manager Sayed Agha and two other staff members of the branch.

Azimi added that the incident took place Tuesday following which the staff members of Spin Boldak Branch escaped to Pakistan which is on the border with Spin Boldak.

He said that the robbers have taken their families with them to Pakistan.