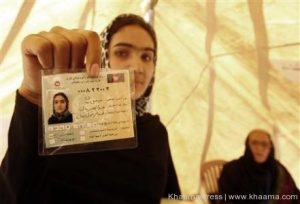 The enrollment process of voters for the upcoming presidential palace officially started in capital Kabul and other provinces of Afghanistan.

Afghan independent election commission officials urged all eligible Afghans to obtain voting cards and insisted that a free and fair election will be
organized.

The presidential election along with the provincial council election is due to be organized on 5 April next year and the distribution of voting cards will cotninue for another ten months.

Afghanistan independent election commission chief Fazal Ahmad Manawi told reporters, “We are facing presidential and provincial elections next year and I emphasize that no one will be able to pass the elections through illegitimate and fraudulent voting.”

Around 41 enrollment centers have been opened in 82 locations across the country for the individuals to enroll themselves for the upcoming elections.

Mr. Manawi further added that only those individuals will receive voting cards who are 18-year-old and above and those who lost their cards or have recently repatriated from the neighboring countries.

The enrollment of candidates for presidential and provincial elections will be started in August this year. The electoral campaigns will also start from the same date.

Security issue is one of the main concern which threatens the upcoming presidential and provincial elections however head of the independent election commission Fazal Ahmad Manawi said that voting centers will be opened only in areas which are safe.