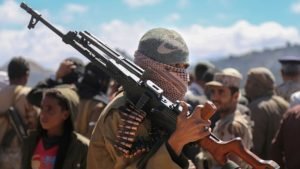 Distressing reports have emerged regarding the recruitment of Afghan youths from Saudi Arabia to fight in the ongoing war in Yemen.

The Afghan youths are mainly recruited to fight against the Houthi rebels amid ongoing campaign by Saudi-led coalition, according to BBC Persian findings.

The revelation was made after conducting interviews with the family members of the Afghan youths who have gone missing after visiting Saudi Arabia for Hajj pilgrimage.

Their family members however have said it is yet not clear who are deploying the youths to Yemen.

A man whose relative has been deployed to Yemen two months ago told BBC Persian that six to seven members of his family have left for Yemen after visiting Saudi Arabia for Umra Hajj pilgrimage.

The man identified as Ahmadeen further added that 40 to 45 people from the close villages and the youths are mainly participating in the war in Yemen to defend from Mecca holy city.

This comes as reports emerged late in the month of August last year suggesting at least 3,500 Afghans are fighting in Syria in support of Bashar al-Assad.

Relatives of a number of those killed while fighting for the Syrian regime have said the Afghan nationals are lured by the month salary of $700 and Iranian residency permit.