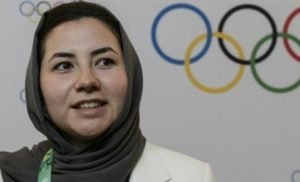 An Afghan woman and member of Afghan women’s basketball team has been appointed as the new member of the International Olympic Committee.

“She’s a lady who is doing a fantastic job to promote women’s sports in Afghanistan,” IOC president Thomas Bach quoted by AFP said.

“I am working for the future of all athletes around the world, especially those in need, like in Afghanistan,” Asghari told AFP.

The situation for sports and women in Afghanistan, she said, was “better than before” thanks to the work of the Afghan Olympic committee and the sports minister.

According to reports, the 24-year-old Samira Asghari is among nine newly-appointed members of the International Olympics Committee.

The announcement regarding the appointment of the new members of the International Olympic Committee was announced on Tuesday.