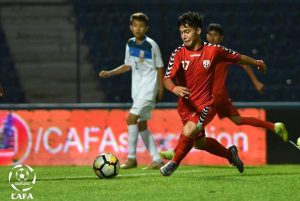 According to Afghanistan Football Federation (AFF), the Afghan Under-15s performed well during their second match on Tuesday and managed to hit two goals during the first round of the match.

Both the teams performed well during the second half of the game but the Afghan Under-15s could not hit more goals.

However, the Under-15s football team of Kyrgyzstan managed to hit a goal during the second half of the match but failed to secure more goals to level or win the game.

This comes as the Afghan Under-15s football team had lost their inaugural match of the CAFA Under-15s against Tajikistan.

According to the Football Federation of Afghanistan, the Afghan U-15s had secured first position during the first season of the CAFA Under-15s Football Tournament.