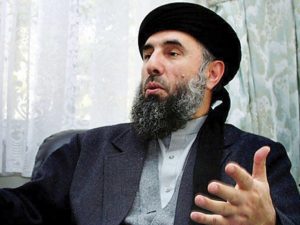 The Hizb-e-Islami party led by Gulbudin Hekmatyar put forward the removal of restrictions as a condition for joining peace process.

Sources in High Peace Council (HPC) say Hizb-e-Islami wants the United States and other countries to remove all restrictions imposed on it.

The demand was probably made by a delegation of Hizb-e-Islami that visited Kabul about 13 days before.

The delegation had also demanded a share in power by placing members of Hizb-e-Islami in civil and security institutions of the country.

“At this stage, Hezb-e Islami is seeking to become a government partner by seeking positions in civil and security institutions,” an Afghan official told RFE/RL on condition of anonymity because he was not authorized to speak about the ongoing talks.

He added that the government was “listening and evaluating the practicality of their demands,” but that a final decision had not been made.

Hizb-e-Islami is the first group among those in war with the government that sends its delegation to Kabul for peace talks.

The visit was made following a call by the Quadrilateral Coordination Group (QCG) which includes Afghanistan, Pakistan, The United States and China.

The group urged all armed opponents of the government to lay down guns and join peace process.

However, Taliban rejected the call with setting the complete withdrawal of the foreign forces from Afghanistan as one of their pre-conditions.

One thought on “Afghan Reconciliation: Hizb-e-Islami wants removal of restrictions”