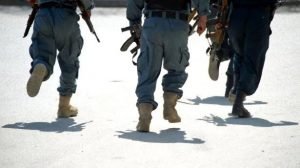 The Afghan National Police (ANP) forces have suffered casualties in an attack by Taliban insurgents in southern Kandahar province.

According to the local officials, the attack was carried by a group of Taliban insurgents late on Wednesday night in Maiwand district.

Provincial governor’s spokesman Samim Khpolwak confirmed the incident and said at least two policemen lost their lives in the attack and three others were wounded.

However, another official, speaking on the condition of anonymity, said six policemen lost their lives and two others were wounded.

The attack was carried out in Shalghami area of the district.

Kandahar, the birthplace of the Taliban insurgents, has been relatively stable during the recent months although the anti-government armed militants attempt to destabilize the province.

At least 12 people including the deputy provincial governor and five UAE diplomats lost their lives in an attack in this province nearly ten days ago and several others including the UAE ambassador and Kandahar governor were wounded.

The cousin of the former Afghan President also succumbed to his injuries he sustained in the attack as he was receiving treatment in India.