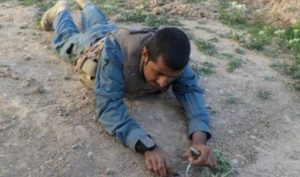 An Afghan police officer was commended for exceptional courage while serving with the Afghan police and defusing over 6,000 Improvised Explosive Device (IED).

The Ministry of Interior (MoI) said Afghan Yar was also granted a promotion for his long term service where he defused thousands of IEDs in restive Helmand province of Afghanistan.

Gen. Salangi also hailed the young officer for his commitment to continue saving innocent lives by serving with the Explosive Ordnance Disposal team.

The anti-government armed militant groups, including the Taliban militants frequently use improvised explosive device (IED) as the weapon of their choice to target Afghan and coalition forces.

Since the fall of the Taliban in 2001 home-made bombs have claimed more lives in Afghanistan than any other weaponry. It takes skilled explosive ordnance disposal teams to combat these so-called IEDs or improvised explosive devices.

A report by the United Nations last year stated that nearly 3,000 civilians were either killed or wounded by IEDs last year; that’s a 14 per cent increase on the previous year.

As coalition troops shrink in number, Afghan forces are increasingly taking on the role of EOD technicians, learning how to defeat the IED threat.

Currently, there is one EOD Engineering School located in northern Mazar-e-Sharif city of Afghanistan where students come from all provinces to learn the necessary tools in dismantling IEDs.