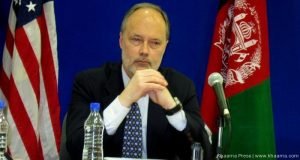 US ambassador to Afghanistan James B. Cunninghum has said that the agreement to start peace talks with the Afghan government relates to the Taliban group.

This comes as Afghan president Hamid Karzai and US president Barack Obama on Friday agreed with the Taliban liaison office establishment in Qatar.

He said, “The two leaders made clear that peace negotiations and reconciliation is vital for the two natins and they encourage the establishment of Taliban liaison office in Qatar so that the Afghan government and Taliban group can hold peace talks. The decision will finally depend on the Taliban group.”

In the meantime Afghan government earlier said that Afghanistan will not agree with the establishment of Taliban liaison office in Qatar unless the group does not show an interest in sitting for peace talks with the Afghan officials.

After nearly 10 months in limbo, tentative reconciliation efforts involving Taliban insurgents, the Karzai government and other major Afghan factions have shown new signs of life, resurrecting tantalizing hopes for a negotiated end to decades of war.