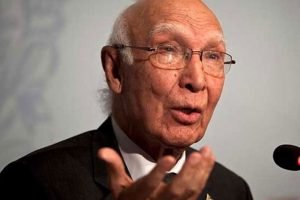 A senior Pakistani government official has said achieving peace and stability in Afghanistan would not be possible without the support of Pakistan.

Speaking during a gathering on Tuesday, planning commission deputy chairman Sartaj Aziz, said any future progress on regional integration would sustain if peace and stability prevailed in Afghanistan.

However, he said this would not be possible without the support of Pakistan to the international community, insisting that Islamabad is committed to do all it can to help the Afghan reconciliation process.

The remarks by Aziz came as the Afghan government officials and the international community have long been emphasizing on a peaceful approach through Afghan-led reconciliation process to end the ongoing violence.

During his meeting with the Pakistani officials, the US Secretary of Defense James Mattis  emphasized the vital role that Pakistan can play in working with the United States and others to facilitate a peace process in Afghanistan that brings stability and security to the region.

“The Secretary reiterated that Pakistan must redouble its efforts to confront militants and terrorists operating within the country,” he said.

In the meantime, the Taliban group has so far rejected to participate in any form of reconciliation process.

On the other hand the commander of the US forces and the NATO Resolute Support Mission General John Nicholson has warned the group that it cannot win on the battlefield.

Speaking to reporters in Pentagon last week, Gen. Nicholson said pressures on Taliban, Haqqani network, and their enablers will rise in a bid to force the militants to start talks for negotiated settlement.

According to Gen. Nicholson, Afghanistan and the coalition will use three forms of pressure to make this happen, he added: military pressure, diplomatic pressure and social pressure.

“In the face of this pressure, the Taliban cannot win,” Nicholson said. “Their choices are to reconcile, live in irrelevance, or die.”