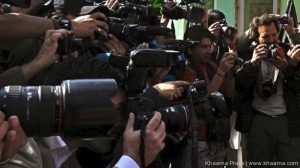 The lower house of the parliament – Wolesi Jirga, on Monday approved the Access to Information Law by majority.

The law consisting of 6 chapters and 32 articles, was approved by Afghan lawmakers after it was put in discussion during Monday’s session.

The session was attended by 156 lawmakers where only three lawmakers gave negative vote while modifications were made in three parts of the law.

Lawmakers said they hope that the law will be approved by upper house of the parliament – Meshrano Jirga and will be passed by Afghan president.

House speaker, Abdul Rauf Ibrahimi, said three paragraphs were deleted from the law and was then approved by majority of the lawmakers.

Afghanistan will have Access to Information Law for the first time once the law is approved by upper house of the parliament and passed by president.

The supporters of media and freedom of speech have long been criticizing the government for being reckless to pass the Access to Information Law.