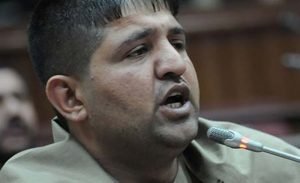 A prominent Afghan lawmaker representing the southern Kandahar province in the Lower House of the Parliament, WolesiJirga, has been accused of conducting aerial firing in Kabul city while being under the influence of alcohol.

The Kabul Police has confirmed that the incident took place late on Thursday night in the West of Kabul city, involving MP Lalai Hamidzai.

The incident has reportedly taken place in the vicinity of Karte Se area of the city, involving Lalai and many of his bodyguards.

Kabul Police Chief Hassan Shah Farogh confirmed that the aerial firing continued for at least half an hour, erupting discomfort among the city residents.

The police officials further added that Lalai is also accused of disrupting the local residents by hitting at the door of their houses.

Lalai and his bodyguards reportedly fled the area after the security forces were deployed to stop the firing.

According t the Kabul Police, investigations show the lawmaker was not under any kind of threat, promising that necessary steps will be taken to address the irresponsible firing under the alcohol influence.

This comes as Kabul city has been hit by a series of deadly attacks during the recent weeks with the aerial firing by the lawmaker sparking concerns among the residents that another complex attack was underway in the city.