Afghan MP barred from parliament sessions for assault on minister 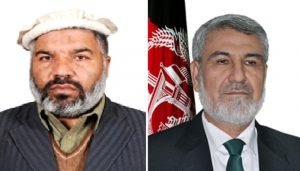 The Afghan lawmakers have unanimously voted to bar lawmaker Ghulam Sakhi Mashwani from parliament sessions for a period of at least 10 days after he assaulted on Minister of Rural Development Nasir Ahmad Durani’s face last week.

The decision to bar Mashwani from parliament sessions was announced by Zahir Qadir during the general session of the Lower House of Parliament, Wolesi Jirga today.

The lawmakers have also called on Mashwani to apologize from the second secretary of the house for his move.

This comes as the lawmakers were mulling to suspend Mashwani’s membership from the house for a period of at least a year.

Mashwani is representing eastern Kunar province in Lower House of the parliament and assaulted on face of Nasir Ahmad Durani after picking the sign of his name from his table.

The incident took place during the general session of the parliament where the Minister of Rural Development was summoned along with the Minister of Finance and Minister of Public Works to brief the lawmakers.

The lawmakers present in the session were shocked with Mashwani’s move and called it against the principles of the session and decided to take actions against him after he was taken out of the session by the security guards.