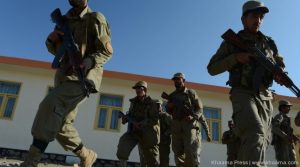 According to local authorities in southern Helmand province of Afghanistan, at least five Afghan Local Police (ALP) officers were killed following an insider attack in this province.

Gresh district governor Mohammad Fahim Mosazai confirming the report said Afghan security forces have launched an investigation in this regard.

Mr. Mosazai further added that it was not clear if the attack was carried out by one police officer or other militants were also involved.

He said the assailant officer has managed to flee the area and has taken all the equipments and ammunition with him.

Helmand is among the volatile region in southern Afghanistan where Taliban militants and other insurgent groups are openly operating.

Taliban group in a statement said that the attack was carried out by a number of ALP officers, and the assailants have joined Taliban fighters after the attack.