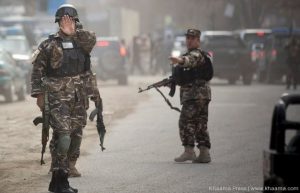 A would-be suicide bomber was arrested along with another suspected militant in connection to the attack plot by the Afghan intelligence operatives.

A statement by NDS said the suspects were appointed by the Haqqani terrorist network to carry out an attack in the city.

Abdul Rahim has confessed that they were appointed by Haqqani network commander Sabrullah Zadran to carry out the suicide attack in Kabul, NDS added.

NDS also added that Abdul Rahman has confessed he was involved in other suicide attacks in Kabul city where he has taken suicide bombers in the city.