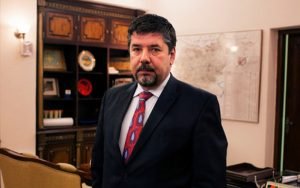 The Afghan Intelligence – National Directorate of Security (NDS) Chief Rahmatullah Nabil issued an unusual statement slamming Pakistani Prime Minister Nawaz Sharif for his remarks delivered during the Heart of Asia summit where he said the enemy of Afghanistan is Pakistan’s enemy.

The message was posted on official Facebook page of Mr. Nabil earlier tonight and shortly after the leaders of the two countries agreed to revive the stalled Afghan peace talks.

Nabil said the innocent Afghan civilians were martyred and beheaded in Kandahar airfield, Khanshin district of Helmand, Takhar and Badakhshan at the same Nawaz Sharif was delivering his speech, once calling the enemy of Afghanistan as Pakistan’s enemy.

In parts of his message, Nabil was apparently criticizing President Ghani for his remarks in Islamabad today, saying “At least 1,000 litres blood of our innocent people spilled which was similar to the red carpet where we did a cat walk. But the one who was present with us in the gathering and made an announcement from Quetta city of Pakistan under the name of Taliban, using the ISI computer to claim the glory. And we became so much apprehended and excited with 21 artillery gun salute that we agreed regarding the execution of 40 assaults/operations against the enemies of Pakistan and promised to soon launch a large operation against Mullah Fazlullah in a bid to keep our 60-year-old friend glad.”

Nabil also added that Sirajuddin Haqqani (Khalifa Sahib) was busy in a circumcision ceremony of his newborn baby from his third wife as Mulalh Akhtar Mansoor was busy plotting further attacks to kill more people in Afghanistan from By Pass area of Quetta city where he was provided security by ISI and in the presence of Colonel Rana who is also famous as Rabani.

Concluding his statement with the message ‘Thanks God I was not there’, Nabil has raised a question in Pashto, saying ‘What happened to our 5000-year-old history? That kneeled in front of a 60-year-old history’.