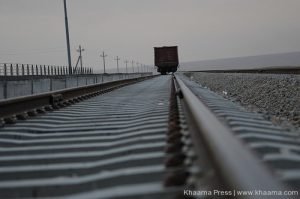 According to the Tajik president’s official website, the sides also discussed cooperation between relevant bodies of the two countries for implementation of ambitious regional projects.

Dr. Rassoul underlined Afghanistan’s commitment to the core values and principles of the only continent-wide process of its kind to promote cooperation across Asia.

“Afghanistan particularly, fully and whole-heartedly endorses and aligns itself with the concept of ACD enhanced regional connectivity to promote trade, investment, transit, people-to-people contacts. This is a concept that lies at the heart of our own vision for a life of peaceful and mutually beneficial co-existence and cooperation with our neighbours and the broader region around us,” Dr. Rassoul said.

Dr. Rassoul added that Afghanistan’s unique place as an “Asian Roundabout” offered tremendous opportunities in all the above areas among three of Asia’s major sub-regions, namely South Asia, Central Asia/Eurasia and the Middle East/Western Asia.

“To illustrate this uniqueness, consider the fact that Afghanistan is less than a single day’s drive to two of the world’s largest economies, both of which are growing at a monumental rate,” Dr. Rassoul said. “Consider also that Afghanistan is the only dark spot in our continent’s and especially in the Heart of Asia region’s vast railway networks. Removing this dark spot by implementing existing plans to connect the railway networks of Pakistan, Iran and all Central Asian states with one another and with other sub-regions in the Asian continent and beyond will dramatically increase trade, investments and people-to-people contacts. Similarly, Afghanistan is the one missing link in connecting energy-rich Central Asia with energy-deficient South Asia through power grids and energy pipelines.”

Dr. Rassoul added that the Afghan people and government’s ongoing successful efforts to improve security, build lasting peace, strengthen state institutions and further consolidate our national sovereignty leading up to and beyond 2014 will also increasingly allow Afghanistan to contribute to regional peace, security and economic development, as well as to the ACD’s vision and goals.

Among other things, participants at this meeting agreed to the establishment of a provisional secretariat for the ACD in Kuwait until the next summit in Thailand in 2015.

They also expressed hope that a trilateral trade and transit pact that would be signed between Tajikistan, Afghanistan and Pakistan would pave the way for further expansion of trade and economic cooperation between the nations.

President Rahmon noted that Tajikistan was ready to provide assistance to Afghanistan with training of personnel for its railway and other sectors.