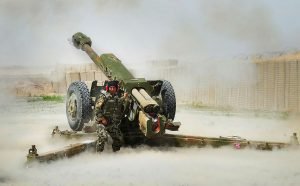 The Afghan security forces have responded to the heavy shelling from across the Durand Line in eastern Kunar province of Afghanistan, the local officials said.

Provincial security and government officials are saying that the retaliatory move by the Afghan border police has resulted into a reduction of the shelling over the populated areas.

He said the shelling was done by the militia forces of Pakistan and in response the Afghan forces fired artillery shells on the compound of the Pakistan militias, apparently incurring casualties.

Provincial governor wahidullah Kalimzai also confirmed the retaliatory move by the Afghan border police and said the shelling from the across the line has halted for the moment.

This comes as the commander of the US forces in Afghanistan General John Nicholson who is also the commander of the NATO-led Resolute Support Mission in reaction to the latest shelling by the Pakistani military had earlier said that the Pakistani military should share the information regarding the terror groups rather than opting to cross-border shelling.

The Pakistani military has long been shelling the Afghan provinces located along the Durand Line, claiming that the shelling are made in response to the attacks by the militants using the Afghan soil.

The shelling continues amid strained ties between Kabul and Islamabad regarding the circumstances surrounding the fight against terrorism and terror safe havens.

The Afghan and US officials believe the Taliban group and the notorious Haqqani terrorist network still possess safe havens in the FATA areas of Pakistan from where they plan and coordinate large scale attacks in Afghanistan.