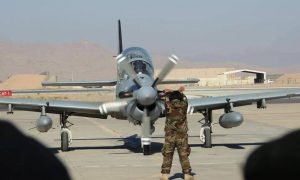 The planes were deployed earlier this month and a ceremony was organized to mark the arrival of the aircraft.

The Afghan Air Force received several A-29 and MD-530 Cayuse helicopters from the United States earlier this year which are playing a key role in providing close air support to the Afghan forces.

“The AAF’s capability to provide airlift, casualty evacuation (CASEVAC),4 and organic aerial fires continue to improve as the Department of Defense (DoD) fields more aircraft to the AAF and as its pilots and crews gain operational experience. With the fielding of 12 additional MD- 530 attack helicopters during the reporting period and several more months of operational employment of the A-29 light attack aircraft, the AAF demonstrated increasing effectiveness in providing aerial fires in support of ANA ground forces,” according to the latest Pentagon report, Enhancing Security and Stability in Afghanistan.

The report further added that the use of A-29s and MD-530s in particular were critical to the success of ANDSF offensive clearing operations during Operation Shafaq. After a little more than six months of conducting combat operations, the ANDSF is proving increasingly effective at integrating the A-29 into operations. The AAF is also working more closely with the ANA to improve aerial fires integration through the further development of Afghan Tactical Air Coordinators (ATAC).

The AAF use the A-29 Super Tucano light attack aircraft to attack targets of strategic significance and to provide critical air support, such as aerial fires, to ground forces. The A-29 can carry Mk-81 250-lb bombs, Mk-82 500-lb bombs, rockets, and two .50 cal machine guns mounted in the wings.

The A-29 is also capable of employing laser-guided bombs, but due to low aircrew experience levels, technical issues with front seat targeting and aircraft performance limitations, employment training has been delayed, the report stated, adding that the A-29 pilots however continue to achieve high accuracy with unguided bombs, and there has been no operational impact due to the delay of the laser-guided bomb training.

Eight A-29s are in Afghanistan along with their Afghan pilots and associated maintenance personnel. Twelve more Afghan A-29s are at Moody Air Force Base, Georgia, to support pilot and maintenance training, and will be delivered to Kabul by late 2018.