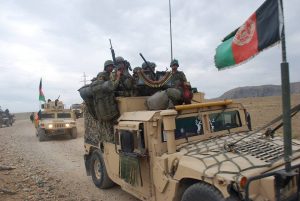 The Afghan National Defense and Security Forces (ANDSF) have recaptured a number of the security posts in Jalrez district of central Wardak province.

According to the local security officials, the security posts were captured during two days of ongoing operations which were lunched following a coordinated Taliban attack.

Provincial governor’s spokesman Abdul Rahman Mangal said the security posts were captured by the Taliban militants two days ago and an operation was launched to clear the area from the militants’ presence.

He said at least security personnel sustained injuries during the operations and around 15 Taliban insurgents were killed or wounded.

The local officials had earlier warned that the district would fall to Taliban control if additional forces were not deployed to repulse the Taliban attack.

Taliban militants are actively operating in a number of the remote districts of Wardak province and often carry out insurgency activities.

The militants are also occasionally targeting the security forces and passenger buses and vehicles on the highway connecting Kabul with the southern and southeastern provinces.