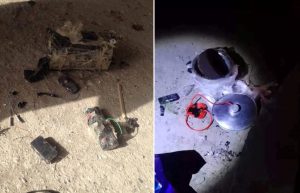 The Afghan security forces have foiled two explosions in two different parts of capital Kabul as the anti-government armed militants are attempting to increase attacks in key provinces and cities of the country.

The Criminal Investigation Department said Tuesday that an improvised explosive device was discovered from Deh Mazang area of the city close to Park Shahr.

The militants had planted the bomb and were looking to detonate it using a remote control but it was discovered and defused by the security forces during a patrol in the area.

In the meantime, the Criminal Investigation Department said a similar improvised explosive device was planted close to the security commandment of Qarabagh.

The source further added that the bomb was discovered and defused at around 7am local time today before the militants manage to detonate it.

This comes as the anti-government armed militants have been attempting to increase attacks in key provinces and cities of the country, including capital Kabul during the recent months.

A suicide bomber detonated his explosives near the election commission office on Monday, leaving a policeman dead and another wounded.