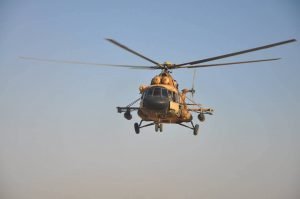 The Afghan national defense and security forces have destroyed a helicopter after it made a hard landing during an operation in southern Helmand province of Afghanistan.

The Ministry of Defense (MoD) said the helicopter made a hard landing in Nahr Saraj district while providing close air support to the security forces.

The source further added that the crew of the helicopter were all evacuated safely and the chopper was destroyed by airstrikes.

According to the Ministry of Defense, the helicopter made hard landing in Yakhchal area and the crew were evacuated to Shorabak air base.

The Taliban group however claims that the helicopter was shot down by the fighter of the group.

Helmand is among the relatively volatile provinces in South of Afghanistan where the Taliban insurgents are actively operating in a number of its districts and often carry out insurgency activities.

This comes as counter-terrorism operations involving airstrikes are underway in some restive parts of the province in a bid to suppress the militants attempting to expand their insurgency in this province and other key southern provinces.