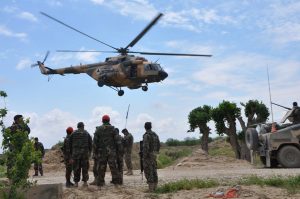 He said the mountainous terrains of the area and its surroundings were cleared during the operations conducted two days ago.

Gen. Waziri further added that the Afghan security forces are still stationed in the area and a search operation is underway to find the insurgents who fled the area during the operations.

According to Gen. Waziri, the ISIS militants have hidden themselves inside the caves in Tora Bora and Afghan forces are busy conducting clearance operations to find them and fully clear the area.

In the meantime, the provincial government in Nangarhar said the Afghan forces have started clearance operations and moving towards Alif Khel and Markhanai villages in Pacher Agam district, located close to the Tora Bora area which has been fully cleared.

A statement by the provincial government said the operations are being led by the 201st Silab Corps of the Afghan national army and in joint cooperation between the Afghan commandos, Afghan intelligence, and security personnel from the other institutions.

The statement further added that no casualties have been reported among the security forces involved in the operations.