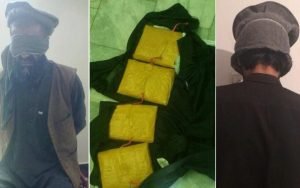 The Afghan national defense and security forces have arrested two suicide bomber during an operation in Kabul city, the Ministry of Interior (MoI) officials said.

MoI spokesman Najib Danish said the two suicide bombers were arrested at around 10:30 am local time from the vicinity of Jada-e-Maiwand area of the city.

Danish further added that the two suicide bombers were arrested from Halabi Sazan lane based on a tip off.

According to Danish, the security forces also confiscated two suicide bombing vests during the operation but did not elaborate further in this regard.

The possible target of the suicide bombers has not been ascertained so far with the anti-government armed militant groups yet to comment regarding the apprehension of the two bombers.

This comes as the anti-government armed militant groups have been attempting to carry out deadly attacks in the key provinces and cities of the country, including capital Kabul.

The militants carried out a suicide attack near the ministry of rural rehabilitation and development in west of Kabul city nearly two weeks ago.

The attack left several people dead including several employees of the ministry who were targeted while leaving for their homes.