Afghan Elections Dilemma: Finish before it finishes you 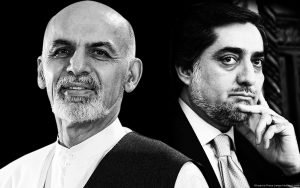 Hazrat Bahar has contributed this Op-Ed to Khaama Press (KP). The author can be followed on Twitter @Hazratbahar.

Afghan elections, as once considered a landmark in the history of Afghanistan, turns into elections impasse. U.S.A had meticulously predicted today’s scenario – elections goes to second round, which will be marred by claims of fraud and the final announcement might take six months- when she was pushing president Hamid Karzai to sign bilateral security agreement. We are more than half done and desperately moving to bleak and gloomy future in the rest of two months, if the dilemma is going to be finished or it finishes us in exactly six months.

During the election impasse, we witnessed many breakings news saying: counting/auditing process stops and resumes. People weary of such narrative. We have been hearing many coded words and expressions from both runners, which are interpreted in different ways. It is hard for those who are part of neither side to understand where the Pandora box is. And both parties are not totally honest vis-à-vis Afghans, for whom the Two were begging to vote in each one’s favor. A very superficial understanding is they have yet to reach power-sharing deal, and issues like fraud and complaints are nothing but sheer pretexts.

The outgoing president urges both runners and IEC to wrap things up sooner as he is packing his stuff up and leaving the much demanded and desired – at least in Afghan politics – chair of Arg (Palace). People can’t decide to decorate their own homes because of election deadlock; “I am waiting for the election to be over before I decide to change the old and worn-out curtains of my house” a woman in Herat was quoted in AAN paper. However, the Two have speeded up the race and have been meeting on daily basis recently, but it has has yet to strike the deal. They are playing a very risky game.

Afghanistan economic growth was falling far before elections and it was fairly inevitable. But the election deadlock has been drastically worsening the fading and fragile economy. Business is contracting. The distressing sentiment among national and international investors is quite visible. Local businessmen don’t import goods that may not be sold out within two weeks. This in turns hikes the essential commodities prices throughout the country.

Afghanistan is highly dependent on foreign aids. Donor countries and organizations have either stopped or halved their funding. A member of an international development organization operating in Khost said, “we have stopped all our field projects. We are waiting for elections and our developing budget will be released once a peaceful elections over.” Seemingly, the government is moving to bankruptcy. A recent announcement by finance minister saying they may cut salaries of the government employees if the tassel prolonged proves how stable our economy is. So far, the 2014 election costs the country $ 5 billion, which is one sixth of Afghanistan total GDP.

Having already 30-35% unemployment rate with almost halted hiring has further deteriorated the shrinking economy and the unemployed youths are prone to resort to counterproductive activities. The notion of ‘national interests’ from the Two is losing value.

The first ever Afghan-led regional cooperation process – the heart of Asia or Istanbul process – was delayed. Its fourth round was schedule to be held on 29th of August in China where the member countries’ foreign ministers would meet and discuss Afghanistan oriented issues.

The questions of legitimacy:

The euphoria of elections and post elections is turning into misery and people are losing trust in elections. In a country like Afghanistan, legitimacy of a deal initiated or advised by foreigners is always questionable. The so-called ‘national unity government’ (NUG) deal was brokered by secretary John Kerry. Highly likely the NUG will be interpreted into fragile and weak government, at least in the beginning. Thus, it is hard, if not impossible, for a weak government to demonstrate itself strong and solidified one on national and international arenas.

National unity government, if formed, has plenty of challenges ahead. Security and political stability are two of them. The armed opponent groups of the Afghan government may hardly resort to peace talks – the only mean to bring perpetual stability, if political environment stays as it is. More are at stake and the Two maybe held responsible for causing and prolonging the dilemma.

FILE: Ousted Pakistani Prime Minister Imran Khan gestures as he travels on a vehicle to lead a protest...