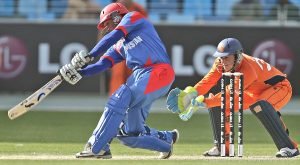 The Afghanistan national cricket team eyes to complete a memorable year by qualifying for a third successive World Twenty20, following the team’s break through to 2015 World Cup.

Afghanistan cricket team has qualified two times for World Twenty20 in 2010 and 2012. “Qualification this time around is very important for us as a team, for our cricket and for our nation. We will try very hard to make it to the Bangladesh event like we did to the 2010 and 2012 events. It will be a big moment for me as a captain,” Nabi quoted by AFP said.

Nabi also welcomed ICC’s decision to allow six teams qualify for 2014 world Twenty20. “It will help a lot of the sides to look ahead positively. For us also it gives a better chance of not just qualifying but also provides us with an opportunity to dream about making it to the second stage,” he added.

He also said that his team eyes to win the tournament besides qualifying for World Twenty20. “The pressure will always be there. Just because six teams will qualify does not mean that our job becomes easier. I therefore believe that we need to look to win the tournament rather than just look to qualify,” said Nabi.

The tournament is scheduled to start on 15 November in United Arab Emirates. Teams from 14 countries will participate in the tournament, with Afghanistan to play alongside The Netherlands, Scotland, Kenya, Bermuda, Denmark, Nepal and Papua New Guinea in Group B.

The tournament will end on 30 November with the qualification of six teams for ICC World Twenty20 scheduled to be played in 2014 in Bangladesh.