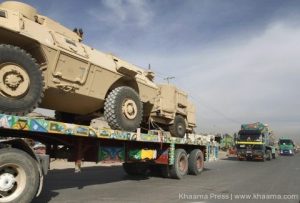 The U.S. Special Inspector General for Afghanistan Reconstruction (SIGAR) following a statement revealed that an Afghan trucking contractor working for the U.S. military in Afghanistan has stolen $77 million in U.S. government funds.

The investigation by SIGAR which took almost three years has led the U.S. Department of Justice to freeze the account and of the Afghan contractor, and efforts have been put in place to seize tens of million of U.S. taxpayer dollars obtained illegally by those contractors.

Hikmatullah Shadman, the trucking contractor is accused of charging inflated prices to the U.S. military for supply transport. Shadman was able to win contracts through rigged bids, bribery and kickbacks.

SIGAR chief John Sopko in a statement said, “We are determined to use all possible means to recover stolen taxpayer money.”

Sopko further added, “I’m proud of my agents, who worked closely with the Department of Justice on this groundbreaking achievement. This hits the criminals where it hurts. SIGAR will stop at nothing to follow this money trail wherever it leads.”

The Shadman’s actions became under the investigation process by SIGAR in 2010, which reveals that he had illegally obtained contracts for 5,421 transportation resupply jobs.

According to SIGAR, $63 million of the $77 million was collected at banks in Afghanistan and around the world by Shadman.

Two of Shadman’s bank accouts in Afghanistan International Bank (AIB) were frozen by the government of Afghanistan in January this year, however the freeze was lifted due to unknown reasons, according to Fiscal Times.

The lift allowed Shadman to transfer money to Bank Alfalah and Emirates NBD Bank in the United Arab Emirates.