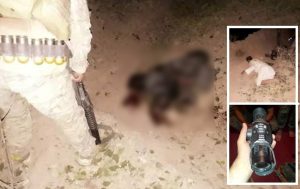 The Afghan Commandos have stormed a hideout of the Taliban group which was used as a headquarter by the Taliban militants in northern Faryab province.

The 209th Shaheen Corps of the Afghan Military in the North said the Afghan Commandos on Tuesday night stormed the Taliban hideout in the vicinity of Khwajah Sabz Posh district.

The source further added that ten militants were killed during the operation and some weapons, munitions, and military equipment were confiscated.

The security situation in Faryab province has deteriorated sharply during the recent years amid growing insurgency activities by the anti-government armed militant groups.

This comes as at least one hundred and two militants including some leaders of the Taliban have been killed in the airstrikes conducted in this province on Sunday.

According to a statement released by the 209th Shaheen Corps, the militants were killed during three airstrikes conducted in the bordering regions between Garziwan and Bulcharagh districts.

The Shaheen Corps also added that the military commission chief of the Taliban for the North, identified as Mawlavi Matiullah, was among those killed.

The other senior Taliban leaders killed during the airstrikes have been identified as Mawlavi Abdul Baqi also famous as Omar, commander Shirzad, and Mawlavi Jabar also famous as Bilal, the statement added.