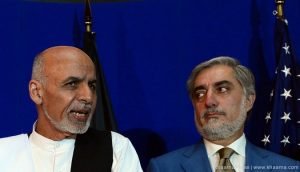 The meeting between the two contenders took place following phone calls by US President Barack Obama who spoke separately with the two candidates on Friday night.

Officials from the campaigns of Dr. Abdullah and Dr. Ghani have said that President Obama urged the two candidates to work closely in a bid to achieve political and technical breakthrough in the election process and to prevent Afghanistan from a political crisis.

A member of Dr. Abdullah’s campaign, Fazal-ur-Rehman Orya, said President Obama was assured by Dr. Abdullah that practical steps will be taken towards the agreement reached between the two candidates following Secretary of State John Kerry’s visit to Afghanistan.

In the meantime, a member of Dr. Ghani’s electoral team has said that the Saturday’s meeting between the two candidates was positive.

According to reports, the two candidates held talks on agreement regarding the authorities of the chief executive post, the formation of which was agreed after the two candidates signed a joint declaration following Kerry’s last visit to Kabul.

However, no further details regarding the talks were disclosed by the two electoral camps regarding today’s meeting between the two contenders.